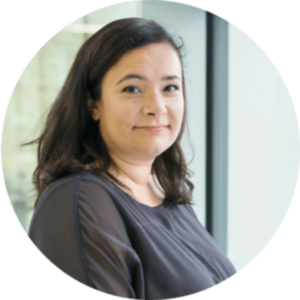 Anastasia Mania has been actively involved in fertility treatment and research since graduating in Molecular Biology at University College London (UCL) in 2004.

She joined the clinical team at UCL working on preimplantation genetic diagnosis and screening (PGD and PGS) whilst at the same time obtaining her MSc in Pre-implantation Genetics and Fetal Medicine (2007).

During her time at UCL she got her first taste for research when investigating chromosomal changes in embryos. Spurred on by this, she began her clinical training in Embryology at a large NHS teaching Hospital in London, where she coordinated the PGD service until 2013. During this time, she became ACE and HCPC registered and taught as an honorary lecturer at Imperial College London’s Masters in Reproductive Biology.

Anastasia then joined a very successful private London unit as a senior embryologist where she became very proficient in oocyte vitrification and blastocyst biopsy. Whilst there, she became team leader for the research group and has published several papers.

Anastasia is passionate about improving pregnancy outcomes and applying the latest research to her clinical work while caring for the patient. Now at King’s Fertility, she is excited about the road ahead.